Skip to content
Posted on August 20, 2016 by Rogue Colonel

TV is a funny old business, you get engaged with a tv show only to be robbed as it fails to be renewed after a single series, sometimes by design, sometimes deservedly so, other times not.  This post is about 5 of my favourite tv series that you probably haven’t even heard of let alone seen but I think are worth your time. 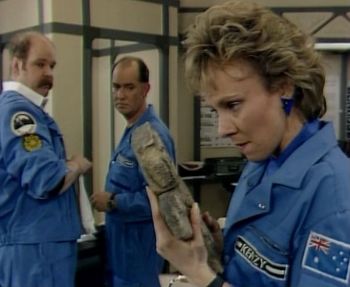 The 80’s were a hard time for sci-fi at the BBC.  Blake’7 had ended memorably (oh so memorably) in 1981, Doctor Who had been moved around in the schedules and would be placed on an 18 month hiatus in 1985 before being cancelled in 1989, The Tripods would see it’s third series cancelled, The Hitch Hikers Guide to the Galaxy would last a single series and Red Dwarf was still only an idea.  And so, one Monday evening in 1987, a new, more realistic series started, science-faction if you will.  Devised by Chris Boucher (of Doctor Who and Blake’s 7) it would aim to tell science fiction but in a more realistic setting in the vein of 1973’s Moonbase 3.  Set in the year 2027, the Earth is ringed by space stations, there is a base on the moon and Mars has been reached.  Policing this new frontier are the part-time members of the International Space Police Force, or the Star Cops.  Each week the team would investigate a futuristic crime as befitted the setting.

Leading the team was an old fashioned Detective cajouled into taking the job in space despite being ill suited for it.  Crimes investigated involved the proliferation of computer viruses, cloning humans and advanced drug trials on deep space missions.  The show also looked into the future with video communication being prevalent and the main character having his own version of what we would now call a PDA.  The model work was of a high standard but some of the interior sets were lit garishly and looked awful until director Graham Harper came on board and immediately dropped the lighting levels to introduce some atmosphere.  Like Blakes7 before it, it’s easy to knock the production values but it had some clever ideas, suffered from some terrible racial stereotyping typical of the era and would also give us some great story telling.

Only 9 episodes were produced with a tenth cancelled due to industrial action.  Listening to Chris Boucher at a convention a few years ago it was obvious he had great passion for the series but regret at how it was treated and produced by the BBC.  In his own words the series had been cancelled before the first episode had gone out.

started fantasy gaming around 1983 when I bought my first Fighting Fantasy book, this elevated to board games like Talisman around 1985, to Dungeons & Dragons in 1987.  Around 1988 I first read of Live RolePlay at Labyrinth from an article in Computer & Video Games and was fascinated by the possibility and then this innocuous tv series started which at the time blew my tiny mind apart.

The story told over four episodes tells of the owner of a fantasy games company having to deal with his erratic former colleague and chief designer.  In an interview the writer commented that the inspiration for the series was if: –

“Arthur said to Merlin after he’d helped set up the Kingdom, ‘Get lost. I don’t need you any more.'”

The Arthurian overtones were very prevalent as the main character has to involve in a series of challenges in order to rescue his kidnapped ex-wife and try to rescue his company.  It wasn’t LARP as we would come to know but life was reduced to a series of games, the one game of the title.

There was only four episodes produced and despite rumours of a second series these never came to anything but that’s ok as the series had a definite end and didn’t on a cliffhanger as so many series seem to do to try and guarantee a second series.

A new planet is colonised by people of Earth trying to make a new home for themselves.  If you are thinking this sounds familiar then you may be thinking of Outcasts, a BBC tv series from 2011 that deservedly only lasted one series.

The early 1990’s was a great time for sci-fi tv with Star Trek: The Next Generation ending on a high, Deep Space 9 and Voyager would both follow in its wake.  Other shows such as Babylon 5, The Outer Limits, Space Rangers, Space: Above and Beyond would all go on to achieve varying levels of success.  Earth 2 premiered in 1994 and follows the adventures of an ill-fated attempt to colonise a far away planet away from the toxic polluted Earth.  It occaisonally gets a bit preachy but backs it up with some good storytelling.  Despite strong inital ratings, these quickly dropped off and the series was cancelled despite the final episode ending on a cliffhanger.

I’ve never really been a fan of vampires on TV and I never got into Buffy or Angel.  It took a phone call from a friend to convince to watch the repeat of episode 1 and from then I was hooked.  It deals with a secret governmental department with ties to the church who investigate and “neutralise” threats from “Code V’s” (the word “Vampire” is never mentioned once).

The series deals with classic themes such as love and loss and how you deal with those situations and emotions.  Although ostensibly told from one side, occaisonally the series also delves into the drives and emotions of those they are hunting and often these are as interesting as the main characters.  This series only had 6 episodes and didn’t end on a cliffhanger but certainly left enough scope for a second series and this seemed to be on the cards but in the words of writer/director Joe Ahearne: –

“Channel 4 never officially cancelled the series, they just never asked for any more.”

An american pilot was produced a few years later with Idris Elba reprising his role but it never got picked up.

From 24 to Homeland, E-Ring to Alias, the TV spy who deals in espionage has always been popular from the 1960’s all the way to the modern day.  Always trying to find a new angle on an existing subject, Rubicon took the viewpoints of the analysts themselves analysing pictures, audio files and surveilance in order to produce reports to help better direct Intelligence Services.  Now this may sound boring but couple the idea with some taught storytelling, good casting and the odd twist and this became a series I devoured over a weekend (and indeed ideas and themes from here influenced some of LARP Game writing).

There are some loose arcs and themes running through the series both personal and professional and some episodes investigate the consequences of the job they do whilst the characters debate whether or not to recommend a missile strike or not.  The series ended not on a cliffhanger but certainly very open ended and very open to a sequel but low viewing figures consigned this series to history.